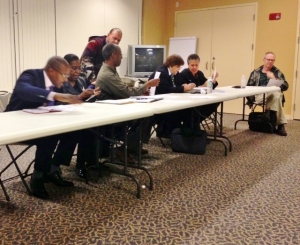 For almost 90 minutes they listened to the developer’s request and to questions from meeting attendees. Sentiment in the room certainly favored an increase in the number of affordable units at Parcel 10’s 2101 Washington Street, a currently derelict structure which the developer intends to renovate as 21 residences. But the SMPOC wasn ‘t having it. As the committee chirman said, “our committee has done more than its fair share of affordable housing.” Noted another committee member, “Our hope is to raise job pay in the area and to step up to the next level.”

By taking this position, and this vote, the SMPOC would seem to put itself at odds with a very vocal constituency in Roxbury that advocates that held a very passionate protest outside the SMPOC’s last public meeting, only two weeks ago. The protest featured Councillor Tito Jackson, who, after speaking at the protest, succeeded at the meeting at having the SMPOC adopt rules assuring a majority of workers doing parcel 10 construction would be local residents and that all would be paid the state’s prevailing wage.

However, Jackson did not present to the meeting any motion respecting affordable housing as opposed to market-rate. as the protest’s first priority was wages and jobs, not specific housing goals, he acted accordingly at the meeting.

Still, the issue is not likely to fade away. the protest loudly opposed “gentrification” in Roxbury — the buying up of Roxbury houses by people not currently living in the rea — and one questioner at last night’s meeting raised the gentriication issue directly. Many attendees followed suit : they exemplify the sentiment of many Roxburyites who see themsleves being priced out of their own neighborhood.

The SMPOC took the opposite position ; that the first priority is to create market-rate residences so that people earning the higher wages that Councillor Jackson advocated for can rent living space with market-rate amenities and market-rate power. After all, the argument goes, who wants to live one’s lie always under a subsidy ? People taking this position well know that if home ownership is to expand in Roxbury, to Roxbury residents, they will have to demonstrate the ability to pay market-rate mortgage payments — and having a record of doing the equivalent by paying market rate rents.

Such, i take it, is the SMPOC’s position, as it tries to raise the incomes and market power of current Roxbury residents faced, right now, with the irresistible market power of “gentrifiers.”

We shall see how this debate plays out. It is far from settled.

At the Dudley Branch Library last night insurgents commandeered the monthly meeting of Roxbury’s Master Plan Oversight Committee. At a press conference prior, and during the meeting itself, a coalition of activists advocating good jobs, higher wages, and affordable housing demanded that their agenda be placed on the Committee’s Plan. Led by District Councillor Tito Jackson, they were successful. The motion carried unanimously, to great applause and cheers from the many locals who filled the meeting room.

The motion specified that 51 percent of all workers employed on new construction pursuant to the master plan be local residents and that at least 15 percent be women. It also demanded that every construction worker be paid the “prevailing wage” (as set forth by state law regarding contracts that receive state funds) whether or not they’re union members. The motion had immediate results, as one presenter, Kamran Zahedi, who plans to build a large hotel in Lower Roxbury, quickly committed to the quotas and the wage scale when questioned by committee chairman Kevin Cherry.

^ top ; Bridget Wallace asks a question ; bottom ; one side of a crowd that filled two sides of the meeting room

As Councillor Jackson put it : “for too long our community has been left behind. we need to be pro active, not reactive. We need to catch up.” His mission was backed by spokespeople from a variety of workers and jobs advocacy groups. Charles Clemons, too, the voice of Touch radio as “Brother Charles,” and a successful entrepreneur, also spoke passionately in favor.

Clemons has it right. How can his business prosper if his audience lacks money to spend ?
Nor did Clemons balk as speakers demanded wages higher than just the new $ 11.00 an hour minimum. Jackson demanded “…at least $ 14l.00 an hour.” His figure began to look modest as some speakers spoke of a day when Roxbury workers could ask — and get — $ 50.00 an hour.

Less convincing was the demand to “stop gentrification.” True it may be, a speakers noted, that Boston has the highest rate of gentrification among American cities at present. But no one had any good answer to the problem. After all, why should a Roxbury resident who has had little money his or her whole life but who now finds him or herself owning a home that’s worth $ 600,000 to $ 1,5000,000 not cash in his or her lottery ticket ?

There’s also a racial tinge to the “stop gentrification” cry. The people who are buying up Roxbury homes at lottery ticket prices are mostly (not all) Caucasian and Asian. Roxbury today is perhaps the most racially diverse neighborhood in the city — but every month it becomes more Caucasian and less Black, because its houses bring huge prices that mostly Caucasians can buy.

Clemons admits it. “We’ve been left behind,’ he says. “We were brought here as slaves and have been left behind ever since.’ True enough. but that doesn’t answer the question at hand : why shouldn’t the almost exclusively Black, long-time owners of Roxbury houses not cash in their lottery ticket no matter who is the buyer ? After all, are they less Black than those who want to stay and feel that they can’t afford to buy ?

And it needs saying ; when stop-gentrification voices talk of “Roxbury residents,” do they mean to not include those recent, mostly Caucasian buyers who are already living in Roxbury ? If not, why not ?

I tweeted this question last night . Nobody responded.

Building affordable housing is a laudable goal. I am not sure how the coalition’s wage demands bolsters the goal. Raising the costs of labor —  great for the laborer, and I approve — cannot lower the cost of the housing they build. Just the opposite.

Clemons says that if local workers earn prevailing wage and higher they’ll then be able to buy in Roxbury. I don’t see how he gets to that conclusion. The higher the local wage, the higher the housing price will be. You can’t raise one price hugely and not bulk the other price too.

To a large extent it’s a dispute between two generations. There were few senior citizens at last night’s meeting. Most attendees were aged 30 to 50, the age group that seeks to buy Roxbury houses, not sell them.