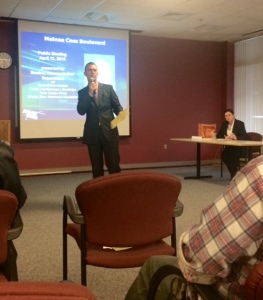 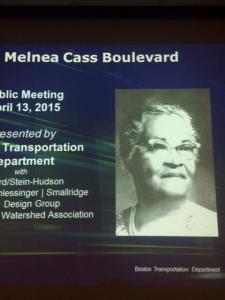 Last night I attended a meeting of the planning group working on renovation of Melnea Cass Boulevard. The invitation came from Madison Park Development Corporation (MPDC), which oversees the creation of newness for the neighborhood that Cass Boulevard passes through, but it is the City, not the MPDC, that has charge of rebuilding the road.

At the meeting I learned that that is and was a mistake.

Many people attended, many of them spoke. State Representatives Rushing and Fox were present,as was Councillor Jackson. I applaud their diligence; both Rushing and Fox have been at this as long as I have ! The attendance of all is a good thing, and I do not fault any of those who came or those who spoke for the failures I see in the project, which is now well along in its process of design and review, review and design.

The failure is the project itself.

First of all, why do we even need it at all ? I drive Cass Boulevard every day. It executes its mission well, which is to swi9ft commercial traffic from the I-93 Massachusetts Avenue exit across the entire neighborhood of avenues and streets overt to the Roxbury Crossing, Tremont Street side of the City thence off to “JP,” Rozzie, and points South. The boulevard — named after a heroine of Boston politics Melnea Cass, who back in the day shjepherded a young Roxbury resident, Ed Brooke, all the way to the US Senate — is of functional design. It isn’t a sightseer’s route. It has a job to do, and it does it. Nor is the road in disrepair, or poorly lit. If roads can be described as fit, Cass Boulevard is fit, very fit.

The result of this unneeded project is that the Lower Roxbury community now has its chance to change the function of Cass Boulevard; to narrow it and add grass-way in the center strip, to add bike lanes, to render Cass Boulevard basically a neighborhood street rather than a flow-through parkway. Again : I do not blame the residents of Lower Roxbury for using the opportunity handed to them. Cass Boulevard does indeed cut a very noisy, busy, high-traffic swath through a neighborhood almost entirely residential. It is not simple to walk across the boulevard from the Roxbury side to the South End side. Cass Boulevard has, actually, become a sort of barrier : to its north, gentrification and very high pr8ice homes; to its south, long-term neighbo0rs and homes less than half as pricey. There also used to be  racial break : Caucasian to the north, people of color to the south., That is changing, rapidly so. 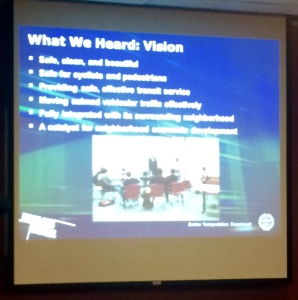 ^ the plan priorities ; the residents attending

Curiously — and I doubt that the Lower Roxbury group sees this — remaking Cass Boulevard as a neighybo9rhood street, wider than most, maybe, but no longer a purely functional swath, will abet the transformation of Lower Roxbury by eliminating the barrier effect. The streets between Northampton on the north and Dudley Square on the south,m will now be one neighborhood, and house prices will rise quickly throughout, as the market power and style cachet of the South End engulfs streets like Williams, Ruggles, and Shawmut, and all of Madison Park itself.

Perhaps the residents do in fact see this and are waiting for the price to reach their I-will-sell mark. That, of course, is something residents at meetings never ever say. But I digress….

The redesigned boulevard, as shown by comments at the meeting, begets all manner of contradictions. Boston Transportation’s Patrick Hoey who chaired the meet8ing, insisted that “the traffic flow must be maintained, that is our first priority.” (The traffic flow figu7re cited was 46,300 vehicles a day.) But how ? If the boulevard is to be narrowed, how ? Suggestions were made, including by me, that we put the boulevard underground, as we did with the Central Expressway. Doing this would make Lower Roxbury entirely whole, without compromise for 46,300 vehicles a day., But Representative Rushing said that his South End neigvhbo9rthood tri9ed it and it doesn’t work, and he gave examples — not complete germaine, but enough to deflect the suggestion. Other people suggested footbridges; they too were argued against by people who talked of footbridges elsewhere that “nobody uses, so they get taken down.”

The redesign meetings go on. My feeling is that they will result in a little bit of this and a little bit of that, to nobody;’s real satisfaction,and that a perfectly good crossway will become something imperfect to everyone’s needs. That to me is not a good way to spend $ 16,500,000 of taxpayer money.