Very troubled by all of the CDC’s present tat the walk, o bend the ear, so to speak, of the new Mayor as he walked the Dudley Square area. CDC’s are not community leaders, albeit they are very active in their own interests, rarely ours, and shouldn’t be seen as ours.

Today at 12:15 PM
Below is a facebook post and reply to my dear Aunt Viola who happened to notice some of the goings on from the WalkBoston tour in Dudley yesterday.

Viola Howard fb post: “Fond memories of Hibernian Hall during the late fifties early sixties attending the Cape Verdean dances….Great memories, fun times and oh the music!!!……”
@Auntie Vi: You probably wouldn’t recognize Dudley now from the 50’s and 60’s. There’s a lot happening. I credit the mayor for sharing his parent’s experience of Hibernian as a dance hall and his voiced commitment to work on preserving Dudley’s history and its people. But sadly, the context and narrative that could speak to your fond memories of Cape Verdean dances at Hibernian, along with the mayor’s reflections, were sorely missing from the actual WalkBoston tour of Dudley that proceeded the gathering at Hibernian.
That’s because the WalkBoston tour was co-opted by the community development corporations that helped sponsor the walk. From the eyes of many the walking tour was strategically designed and meant to promote their various development projects in and around Dudley Square.

Your comment about “oh the music” speaks to the missed opportunity around art and culture and the transformative power of each to engage and bring us together. To have our account hijacked in the interest of gaining favor with the new mayor to promote the development agendas and interests of a cohort of CDC’s over our interests is unconscionable!

I trust the mayor sees this walk for what it was: money and power trying to steer policy! Policy that very often is not the will of the people!

—- Rodney Singleton / seen From the Hill 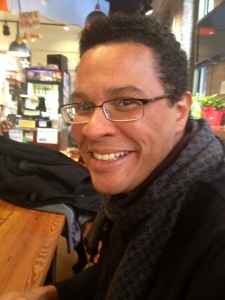 — Rodney Singleton / Seen from the Hill

Recent revelations, in the Boston Globe,of BRA dealings that benefit developers at the expense of a process that serves the community is nothing new!

As if we need reminding, Bartlett Yard/Place (the old MBTA bus garage in Roxbury) recently got BRA zoning commission approval.

The zoning commission process differs from zoning board of appeal (ZBA) approval. There, the principal community notification happens on the BRA web site, where community rebuttal to developer plans seemed dismissed (petition signed by nearly 90 community members to stop development because home ownership was not included in the first phase of development) in an effort to clear the way for developers to move forward.

Having that process move forward, without a clear community input on shaping the outcome of a project, is what we’ve been dealing with since not long after the ink had dried on the Bartlett RFP (request for proposal). Given that community input has been woefully marginalized, our only remaining recourse is to sue.

And now, a quick word to :Undersecretary Gornstein of Housing and Community Development for the State of Massachusetts: Mr. Gornstein, Nuestra does not have the required community support to move forward, but they’ll move forward anyway under this system and continue to destroy our community. Please continue to deny them funding!

The Bartlett RFP has very clear guidelines fora mix of housing affordability. the developer, Nuestra, is violating these in the very first phase of development, putting at risk the entire economic sustainability not only of the project, but also of the entire Roxbury neighborhood. Exactly three years ago, I wrote to the Bay state Banner a “letter to the editor” that I quote below. Home ownership was taken off the table at Atkins apartments too, a development done by Nuestra. Should we be surprised that Nuestra is delaying home ownership at Bartlett? Home ownership has yet to be incorporated at Atkins. What assurance do we have for Bartlett?

Putting economic sustainability at risk in neighborhoods in dire need of it is nothing new either. The community input that helped craft the Bartlett RFP understood this need for sustainability and insisted on income balanced housing — including an element of home ownership. The home ownership requirement spelled out in the RFP has been delayed because the developer cannot find funding — despite having the required community input.

What should trouble members of our community and what this latest Globe BRA article shines a light on: how continued abuse of power — Tom Menino’s legacy to Boston’s neighborhoods struggling for economic equality — impacts our community.
It’s no mystery that developers are eager to meet on January 2 of 2014, to the chagrin of the Walsh administration. With a BRA culture that spurns and mocks the very community input required to make development successful, and as bias and collusion continue, unchecked by oversight, it’s no wonder an envelope need never be passed. Or perhaps the envelop has morphed into a hefty campaign contribution. It’s time to put an end to the BRA and its culture.

The damage in Menino’s legacy has been tragic and devastating. The data cannot be refuted. As the Globe article states, the city, through the BRA, has and is prepared to put down millions on affordable housing projects in Roxbury, while in more affluent neighborhoods in Boston, developers are allowed to opt out of providing affordable housing (i.e. Back Bay/Beacon Hill, Central in the table below).

Add to Menino’s legacy: a quadrupled wealth gap between whites and people of color in Boston under his tenure; failed schools; a diversity record, at city hall and on local construction sites, that’s far from inclusive.

Leadership for our community that doesn’t support a vision of development in which our struggle for economic mobility and parity will not change for the better, and we will remain poor !

Does the incoming Walsh administration’s vision of our future make similar assumptions ? Will Walsh make good on BRA reform?
Accountability is key! It’s time to dig in!

— Rodney Singleton / Seen From the Hill