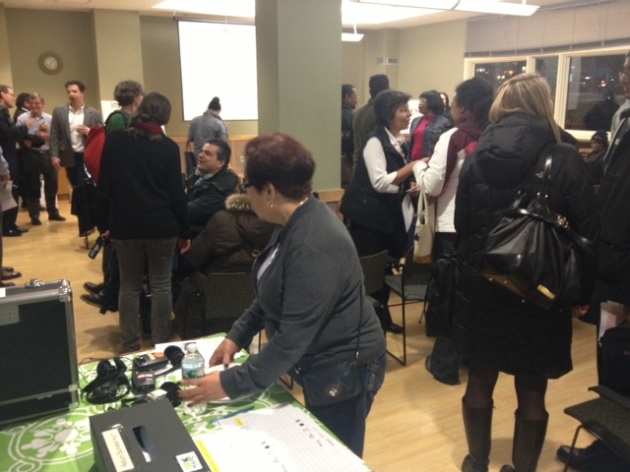 Last night I attended a “community input” meeting sponsored by Jamaica Plain Neighborhood Development Corporation (JPNDC) to discuss, with such members of “the community’ as cared to, plans for a residential building on the now vacant 75 Amory Street parcel. The District’s City Councillor, Tito Jackson was there, along with about 40 residents with questions to ask.

For those who might not be familiar, the parcel in question abuts the Orange Line on its eastward side and also the south side of Centre Street across from the Jackson Square bus station/T stop.

If you knew Jackson Square a generation ago but haven’t seen it since, you won’t recognize the intersection of Columbus Avenue and Centre street. Gone — almost all, –are the weather-worn brick manufacturing floors, the smoke-blackened warehouses , abandoned, hulks of the age of heavy lifting. Gone, too, the Edward Hopper-ish storefronts, the taverns and cigarette stores, the machinists’ works, the garages — and the people who worked in them, many from Germany and Baltic nations, who lived on the Square’s side of Fort Hill. In their place, the Jackson Square of today wide-avenues the world. It’s an emporium of huge complexes, apartments over retail frontage, an entire community in a single Centre Street address.

The new Jackson Square does not embrace; it looms. Thus the new structure that JPNDC unfurled to the community citizens gathered at Julia Martin House last night on Bickford Street. granted that the community in question is well used to buildings that loom, blank brick flat topped. In their midst — home to many — is the notorious Bromley Heath Housing Project, as architecturally featureless as a prison camp, a gravestone of 1940s-1950s public housing in which several generations of the very impoverished have grown up or lived because that was where they were put. One might expect housing of tomorrow to look less boxed than that; the JPNDC proposal does play fun games with its windowing — I suppose that’s a gain — but it clings to box-ness as if boxes were gods. I was not clear that the meeting attendees disapproved. Probably they’re glad to be getting a new box, at least. They’ve sure waited long enough.

Planning began in the late 1990s — the young administrators presenting were probably still wearng pinafores and knickers then. Earnest they looked; well informed about they project they spoke. I could almost hear their resumes, feel their Linked-In profiles. They convinced me that they care; that they are glad that in three years construction will begiun on the 39-unit, “100 % affordable” 75 Amory Street box; that they might be found, now and then, enjoying the transit and Amtrak noise while walking the greenery strip that, if all goes as drafted, will border the Orange Line corridor through which trains roar and zoom.

And of the anticipated residents of these “100 % affordable” apartments ? The artist’s rendering had me grinning. One saw sleekly dressed, high-heeled women walking, presumably to a high tech or law firm office meeting, along a sunny path amid outdoor tables with parasols and, on either side, big brick cubes, utterly quirk-less, pocked by windows long or tiny, tall or small and bordered in pale yellow. Oh what fun !

New boxes do at least freshen the air. Their halls are much easier to inhale the than the old Bromley brickwork with its disinfectant hallways painted 1950s hospital green.

For people who have lived on waiting lists, basically, since they were the children of parents living in bilious green, architecture that’s only one generation obsolete is a great thing. I am glad that it’s coming to them.

But wouldn’t it be even nicer, though perhaps a smidgen more expensive, to give the people of Bromley dwellings side by side, like in Madison Park Village or the row houses along Wasington Street near Circuit Street ? Dwellings that feel like an individual home rather than a Unit with a # next to a number ? And what about ownership ? In other of the proposed Jackson Square blank twelve story boxes, some ownership units will be offered. But not, it seems, in the three-story 75 Amory Street. The ownership of 75 Amory will be an acronym.